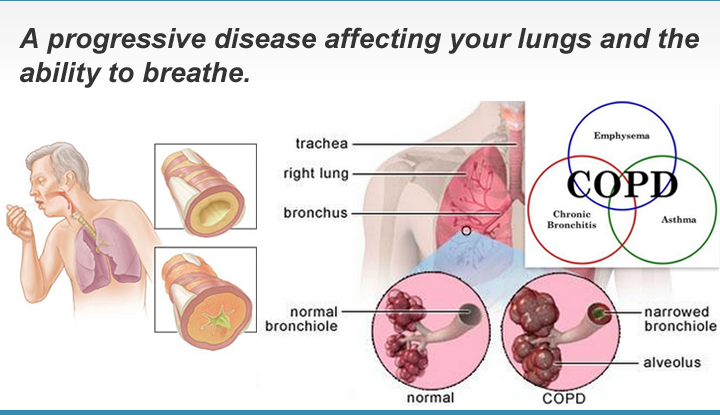 COPD is the most important lung disease encountered and the fourth leading cause of death in the United States, and it affects at least 16 million people. Of the top causes of mortality in the United States, only the death rate for COPD continues to rise, increasing by 22% in the past decade. In addition, the number of patients with COPD has doubled in the last 25 years, with the prevalence of COPD now rising faster in women than in men. COPD causes about 100,000 deaths per year, 550,000 hospitalizations per year, 16 million office visits per year, and 13 billion dollars per year in medical costs, including homecare.

COPD is a slowly progressive, chronic disease characterized by cough, sputum production, dyspnea (difficulty breathing), airflow limitation, and impaired gas exchange. Treatment is available that is more effective when used at the early stage of COPD, before the development of symptoms, than when used after symptoms develop.

The National Lung Health Education Program (HLHEP) was developed to increase awareness of lung health in patients, healthcare practitioners, and health care organizations. This program recommends spirometry, which is a relatively simple and noninvasive test to detect airway obstruction.

In the past my employer used Prevention Health Screenings and found they provided a valuable service to employees. We were pleased with their services, their staff was professional and the screenings resulted in the identification of several health concerns for employees. Jan Thomas, Dir. HR & Business Development
Mid-State Occupational Health Services, Inc
“Recently I had an employee pull me aside and thanked me for saving her life. It turns out that she participated in the screenings and had been told that there was something on her thyroid and that she should have follow-up appointments for further testing..."
Armstrong World Industries
“We had a very positive response from the employees who took advantage of the opportunity. The screening proved life saving for one of our people, who found through the screening that he had two aortic aneurysms. He has since had surgery and an uneventful recovery...”
Tyco Electronics
“I had the Prevention Health Screening done when it was held at my church – St. James in Lititz. It was determined there was a 90-94% blockage in my neck artery. They advised me to see my personal physician right away...”
Doreen Valesano
“We offer the screenings every three years to associates 45 years of age and older as recommended. These associates praised the health screenings and said they would have never known they had the condition without these tests...”
Glatfelter Insurance Group